The Xion CyberX electric moped has just launched today, offering up a high-speed and long-range electric two-wheeler at a price we rarely see in this industry.

That motor is paired with a set of pedals to offer pedal assist, though don’t expect to add much useful pedaling when you approach the bike’s top speed of 50 mph (80 km/h).

A 2.3 kWh pack offering 50 miles of range at 50 mph sounds like a fantasy, so we’ll believe that when we see it. Even if the range rating is a bit optimistic, the bike still packs in a lot of interesting features.

The bike also sports laser-cut LED-light panels on the sides that can be customized during the ordering process for an extra fee – or riders can choose from a number of eye-catching stock patterns. 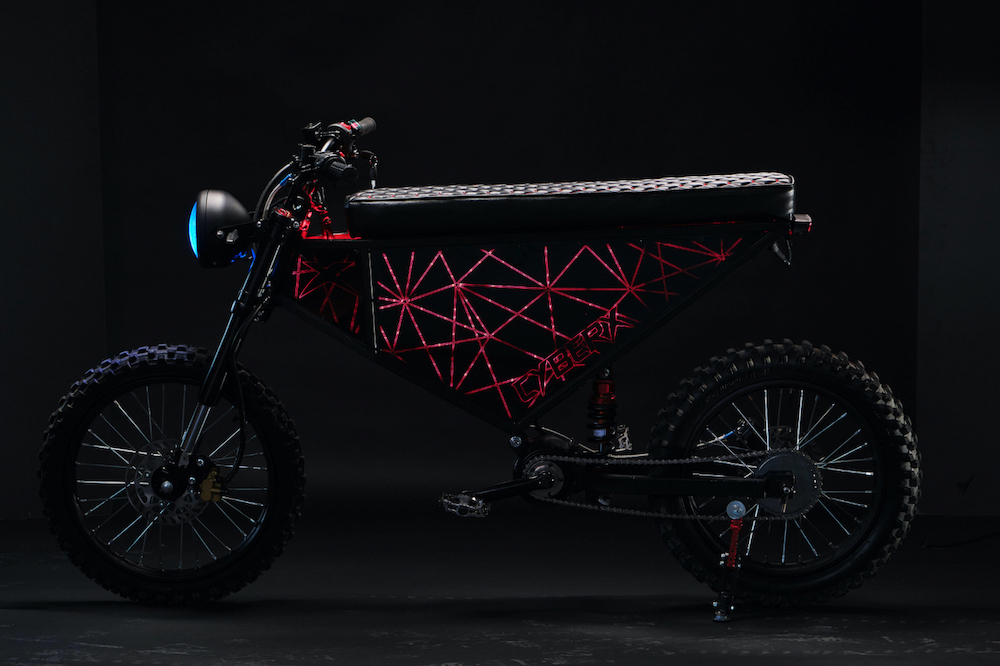 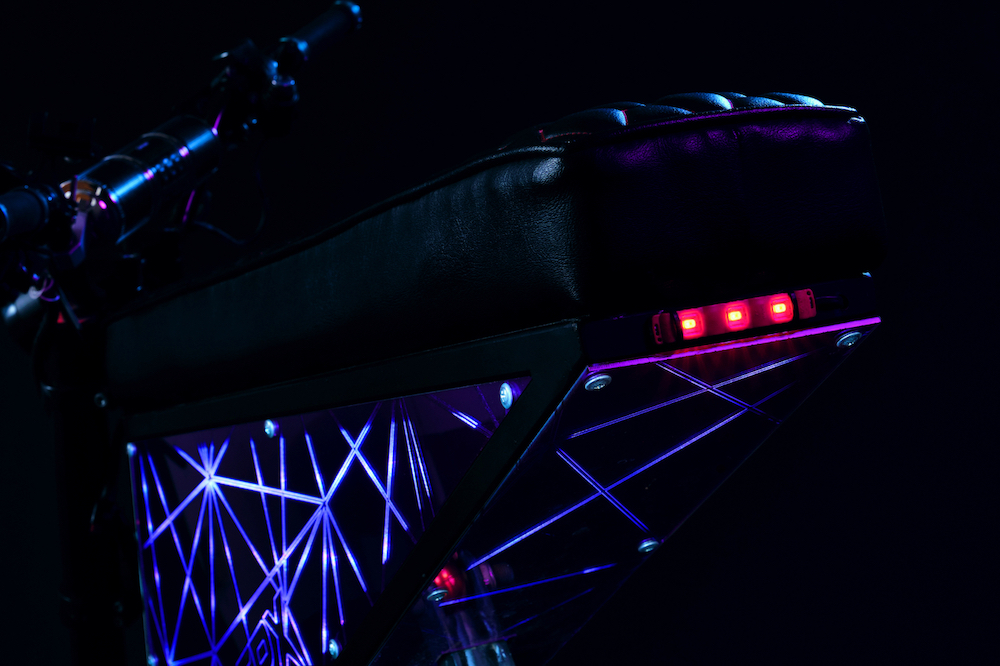 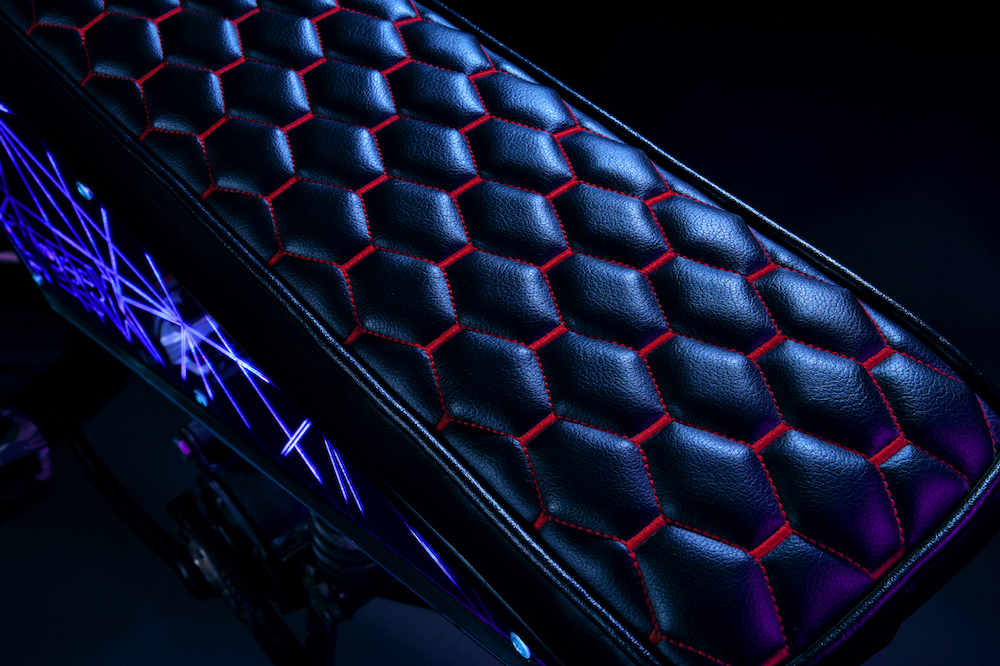 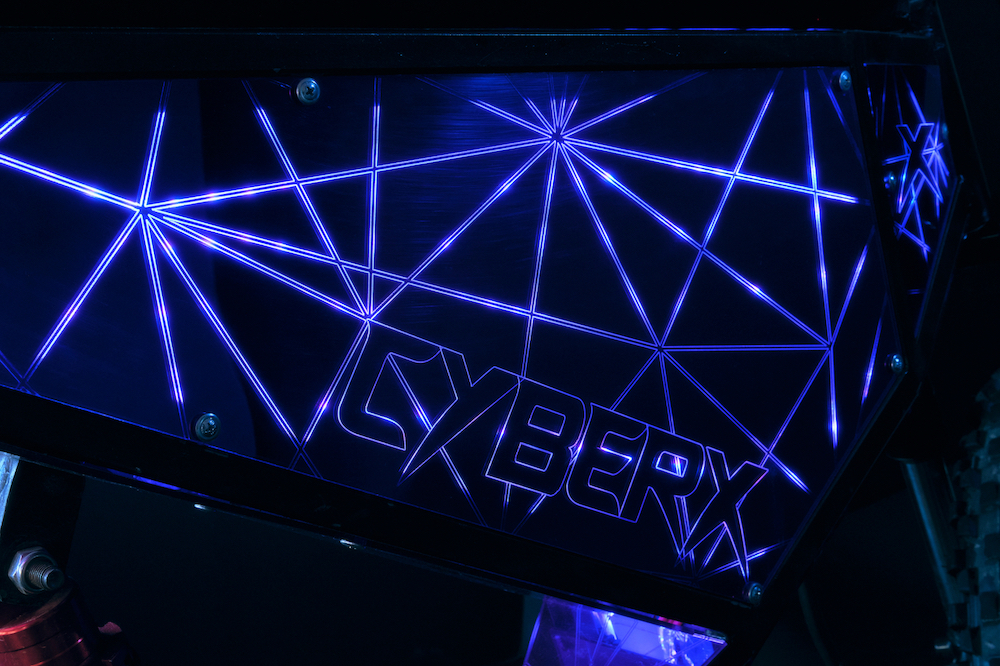 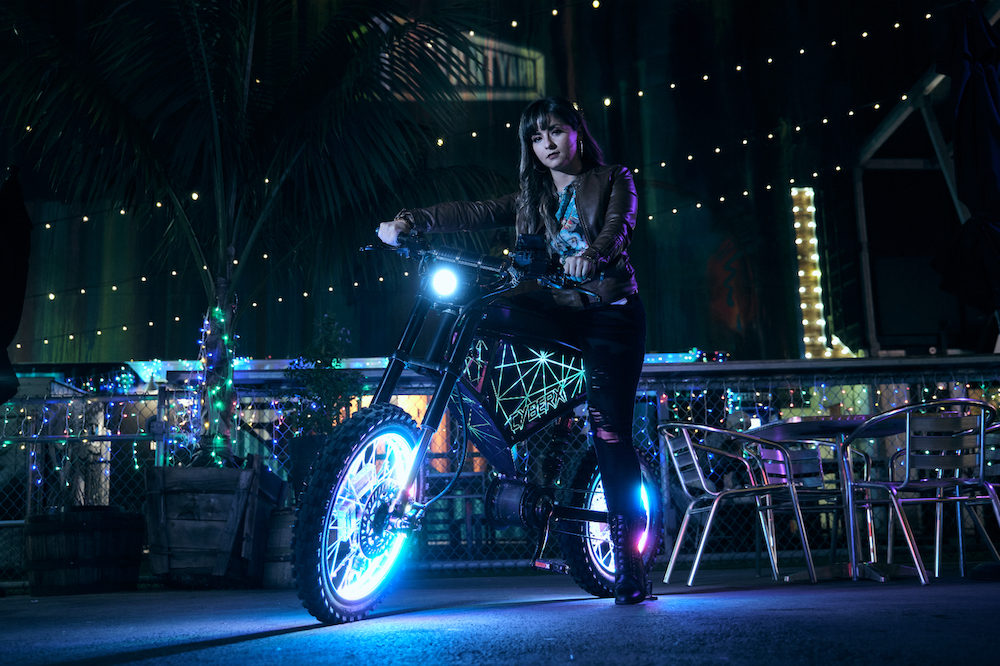 Xion says the CyberX is made in the US, and the company’s founder Ali Horuz has experience building electric pedicabs in the US. The bike is likely a combination of globally sourced parts, including many US parts, with final assembly performed in the US.

Electric dirt bike production in the US isn’t unheard of, but it usually still involves a number of parts made overseas due to a lack of US production of components such as electric motors.

It’s both. Or neither.

The truest definition of this thing would be an electric moped.

But by offering a “Street” mode that limits the power to 750W and the speed to 28 mph (45 km/h), Xion classifies the CyberX as an electric bike that doesn’t require a license.They even go so far as to say it is allowed on mountain bike trails thanks to its e-bike classification.

That’s… an iffy statement. First of all, many mountain bike trails are either off-limits to e-bikes or only allow Class 1 e-bikes (no throttle, top speed of 20 mph on pedal assist).

Secondly, there’s nothing to stop a rider from opening up Race Mode on a trail. Xion even describes the CyberX as a bike that “…gives you comfortable everyday commutes and does serious damage on a sandpit or trail.” So yeah, that serious damage isn’t going to be welcome on any mountain bike trail I’ve ever ridden.

Xion seems to be pitching to the dirt bike crowd as well, which makes a lot more sense to me.

The CyberX has the power and speed to keep up with plenty of dirt bikes, and Xion explains how its low-maintenance design compared to a gas-powered dirt bike makes it a much better choice for riders who want to spend more time in the saddle and less time fixing their bike.

And compared to other electric dirt bikes or e-mopeds, the CyberX is actually quite affordable.

Its $3,699 price undercuts the infamous ONYX RCR electric moped with the DRT off-road kit by $800.

Xion also makes a strong case for the CyberX as a commuter vehicle.

With the high-visibility lighting surrounding the bike, it certainly makes it easy to see at night.

During the day, the combination of high speeds and large battery offer plenty of utility for commuters. And the bike even comes with a VIN and manufacturer’s certificate of origin that should allow riders to register it as a motorcycle or moped in their state, if necessary.

You can even customize the bike’s frame and seat color, in addition to the customizable LED side panels.

The CyberX might not rival the SONDORS Metacycle for specs, but it comes in at a fair bit cheaper.

Ready to take a risk?

If you thought this all sounded a bit too good to be true, then you probably smelled a catch coming.

Technically the bikes don’t exist yet – the company is pre-selling them on Indiegogo.

While that might make some people run for the hills, plenty of companies have gotten their start with e-bikes on crowdfunding sites. Industry leader ONYX first offered the RCR as an Indiegogo project and even heavyweight Rad Power Bikes got its start on Kickstarter.

That being said, crowdfunding campaigns do carry more risk than buying a bike from a dealership, so you’ll need to know that going in. If you’re prepared to wait, Xion says they’ll begin shipping the main CyberX in October of this year, though you can grab one of the early VIP bikes with estimated July shipping.

Ready for the Xion Bike experience?

Buy your Cyberx now and lock in the savings.

Browse apparel
Add to Wishlist
0
Product has been added to your wishlist
You can view your wishlist by creating account or logging-in an existing account.
Please create account/login through {{ customer_email }} email
Login Register
0